“The New York Attorney General announced June 18 (2015) a settlement with Aspen Dental Management, Inc that requires the company to pay a $450,000 penalty…” 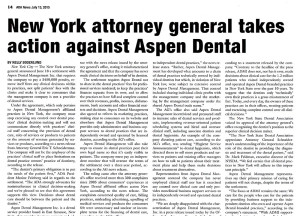 What people need to realize is that a dental office owned and managed by outside investors is being run for business profits and is not focused on patient Healthcare. This is not to imply that every dentist owned practice does not treatment plan based on profit instead of honest patient needs, but, it is guaranteed that the non-dentist owned practice is a business model for profit using dental work as the tool. Patients loose.

In the past 12 months I have had many patient’s come to see me for a second opinion. Here are two cases that typify what I see;

Mark, a 27 year old well spoken and kind gentleman, went to his Network provider dental office after not seeing a dentist for three years. He was told he had gum disease and would require more than just a routine cleaning to the tune of $296.00. Further he was told that he had 12 cavities that needed fillings to a tune of $3,460.00. Because he was in Network the fee would be reduced to $2,342.00 of which his insurance would cover the yearly maximum of $1000.00. Also he was told that he needed a night guard for $600.00 reduced to $283.00 by virtue of Network fee control of which insurance would pay nothing.

After performing a comprehensive exam for Mark, an exam he watched what I was seeing through the microscope on live view, it was obvious that his meticulous homecare had prevented any gum disease and he only had one cavity to be filled. He had no indications for a nightguard. Think of the damage that was going to be done to 11 healthy teeth!

Patricia, a 59 year old woman, had ignored her teeth for some time. Pat went to a dentist in Sarasota and was told she needed all of her upper teeth extracted, bone grafts placed for each site, and a series of two dentures, one for healing and one permanent. The cost for this proposed treatment was $11,394.00. Pat has no insurance. There was a treatment plan for her bottom teeth that priced out at an additional $4,817.00

After examining Pat I agreed that she should have her remaining teeth extracted and a denture placed immediately that would need to be relined in about 4 months. I was then shown the previous dentist’s treatment estimate. Pat was being charged at a much elevated fee for her extractions by calling them surgical when all were just simple extractions of loose teeth. Bone grafts were absolutely pointless and of no benefit to her. Furthermore she was being charged for an extra tooth extraction and bone graft for a tooth that she no longer even had. The concept of two dentures being made is an extravagant and pointless waste of money. It is not a recognized treatment in dentistry. His treatment plan for her bottom teeth was just as exorbitant as it was for the top. Enough said. Pat was being overcharged by more than $10,000.00 and for unnecessary work and also receiving lesser quality than she would be happy with on her bottom teeth.

The most cost effective way to maintain your Oral Health is to practice good homecare techniques and to regularly, every 6 months, see an honest and ethical Dentist who focuses on patient health and not profits. Be wise!

Although I can not list these two offices or dentist’s names in print due to legal reasons we do discuss them with patient’s when asked.

No comments yet. You should be kind and add one! 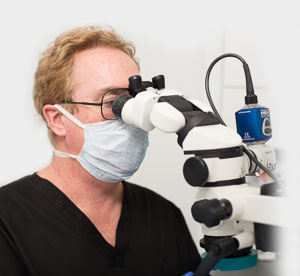 See what others are missing
For more than 25 years the World’s Top Dentists have been using the Dental Microscope to provide the most ideal dental treatment...
Continue Reading

See what Live Microscope looks like from the patient's view.

Call to schedule your comprehensive exam with the Microscope and the Periometer
With a brief meeting, we can assess just what your needs are.

Our Office
We are located on the 2nd floor of
the Venice Health Park
Center Rd. and Jacaranda Blvd.
Venice, FL
Get Directions